A couple years ago, a large maple tree that was a focal point of a home-based Hamilton Road area business, died. The business owner and family weren’t crazy about cutting down the tree. So, they began searching for alternative options. Having seen other carved tree trunks around the city they thought, why not a tree trunk sculpture?

After meeting with Robbin Wenzoski, the sculptor of numerous tree trunks throughout the city, the seeds were sown for the first tree trunk sculpture in the Hamilton Road Area – the Full Circle Group Benefits Moose Head sculpture was born.

The attention the sculpture attracted was unexpected, to say the least. Passers-by perpetually stopped to admire the art and take pictures. Curiosity tempted some people enough to enter the small business to find out more about the sculpture. A once decaying tree trunk had rapidly become an icon on a small side street in the Hamilton Road area and a stimulus for the local community.

About a year ago, the Hamilton Road Area Business Association (HRABA) began seeking ways to stimulate the local economy while simultaneously improving the appearance of the Hamilton Road Area. So, how was a small (but mighty) group like the HRABA going to attain such a feat? With only 60 paying members that contribute modest membership fees, cash flow for the Association is limited. Fortunately, its commitment to helping the Hamilton Road area prosper, in combination with a dash of serendipity, lead the HRABA to discover an innovative solution.

The HRABA was confident that adorning the neighborhood and local businesses with different tree trunk sculptures would deliver positive results for the community as a whole. Although the concept sounded perfect in theory, implementing the idea wasn’t so simple: budgeting, geography, maintenance and community support were all factors that could potentially impede the project from becoming a reality.

After contacting Tourism London, the limited cash flow obstacle quickly took care of itself. The Tree Trunk Tour was an existing incentive program to promote London as an attraction. The program, funded by Tourism London, would offset one third of the cost of a carving and STIHL Limited, whose head office is based in London, would cover another third as well by supplying artists with the necessary equipment. With two-thirds of the cost covered, our budgeting glitch was quickly disappearing.

Another cause for concern was the natural degradation of the wood-based sculptures. The experts explained to us that the portion of the sculpture above ground would last forever, if maintained properly. The vulnerable part, however, is the root system which needed to be properly drained in order to prevent rotting and sculpture instability. The best way to prevent this was to cut the trunk off at the ground, pour a concrete pedestal and then dove-tail the sculpted trunk back down in place.

The partnership resolved logistic obstacles and also provided students in our community with additional co-op opportunities and volunteer hours that could be used toward their graduating diploma.

Currently, Thames Secondary students are responsible for making the forms and pouring the concrete in addition to tending to the maintenance of the trunks in the Hamilton Road Area.

After speaking with the local public schools a community project was launched that rallied students and alumni to submit theme, concept, and name ideas for the upcoming carvings. The feedback and participation was beyond our expectations. 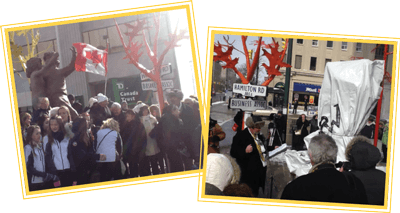 In the meantime, a 100-year old tree was being cut down. Upon hearing the news, the HRABA asked to cease cutting until we determined if the elm tree would make for a good sculpture candidate. After receiving approval from the city forester that the tree was sound for a sculpture, the HRABA decided to officially sponsor its first tree trunk carving – a family of white tailed deer. The deer family sculpture is one of the most recent additions to London’s Tree Trunk Tour and is the first elm tree canvas in the city.

With the 2013 World Figure Skating Championships in London, the HRAB saw another opportunity to promote the city, as well as, our charming neighbourhood. A life sized figure skating couple carved out of Canadian wood could potentially be an icon for the event and simultaneously channel more traffic along Hamilton Road.

The Hamilton Road Area Business Association is ecstatic to see this small idea flourish into a movement of unity and support.

We have begun a waiting list for 2013 carvings and we encourage you to contact us with your interest in participating.

The Hamilton Road Area Business Association would like to give a big thanks to all participants, volunteers and sponsors who have helped make the tree trunk project such a successful community initiative!

by Dave Broostad
Vice-President of the Hamilton Road Area Business Association in London, ON